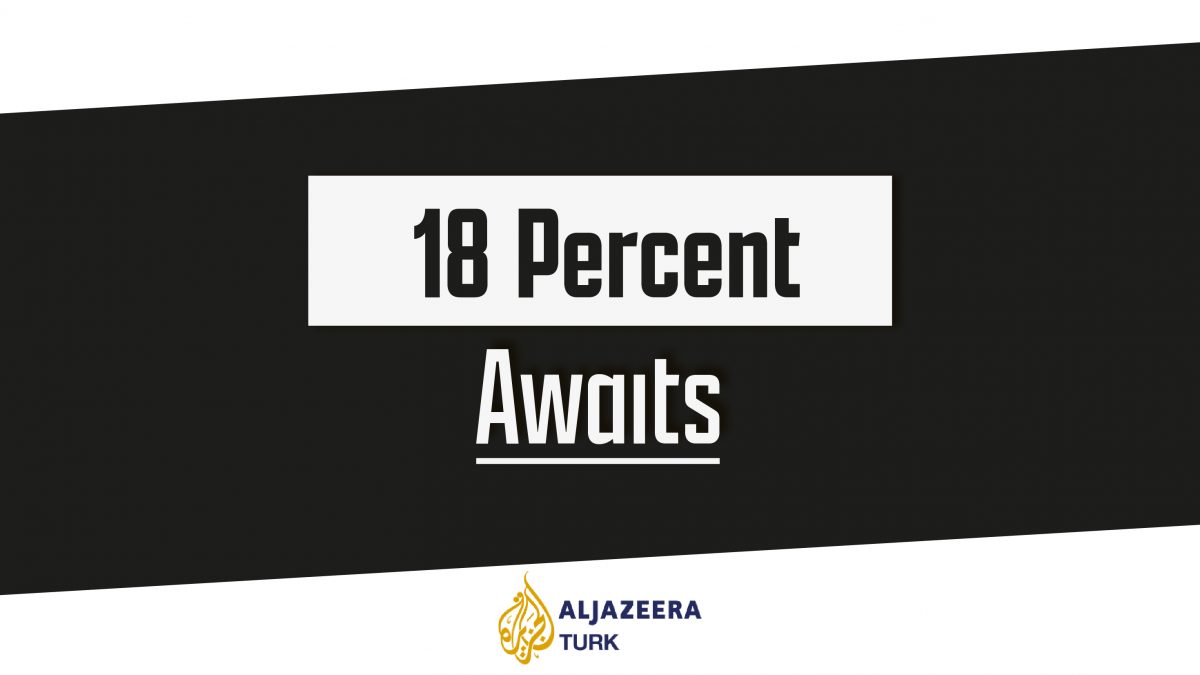 Standing out as the only research organization that knows the presidential election, Andy-Ar is among those who are not mistaken among public opinion research companies. The company recently published a new survey. The survey revealed that there would be no big difference between the June 7th election results and the likely election in November. When we talked to Faruk Acar, the owner of the company, we realized that attention should be paid to an 18% voter group who do not show their side. These voters, who preferred a party two months ago, are now watching the developments lurking in Acar’s definition. Acar is of the opinion that these undecided voters, which they distributed technically, starting with the party that received the most votes, have the potential to mislead even the opinion polls. According to Acar, the parties that campaign well and manage perceptions well will benefit in the next possible election.

In your last survey, you found a swing voter of 18%. How did nearly a fifth of the voters who voted two and a half months ago suddenly become swing voters? Isn’t it a strange situation?

In the survey we conducted right after the election, none of the party voters except HDP voters were satisfied with the result. Despite this, 93% of the voters answered “yes” to our question “If the election is held this Sunday, would you vote for your party again?” In the two months that passed, the voters watched the course and perceived the creation of an environment in which Turkey would face difficulties. At the moment, 9% are undecided, and 9% have the approach of voting, not going to the ballot box, protesting. The fact that we distribute this 18% under normal conditions does not lead us to a very healthy result, but considering that it is a photo that binds the day, we distribute it proportionally. It is useful to comment on the proportional distribution of this 18% today. As someone who has been following the elections in Turkey for 20 years as a researcher, we have never experienced a situation of voters who could not show their side close to 20% two months after the election. Frankly, I haven’t seen a voter who pulled him/herself back in a sense and told that he/she would follow the process by lying in wait. If you remember before the June 7 elections, researchers were always wrong in the elections held in England and Israel. In this election, researchers in Turkey can give such a test. Because this swing voter of 18% is frankly scary for a researcher. These voters are effective enough to change the result.

Are there any voters among these swing ones who brought the AK Party to 41% in the last election?

Nearly 20% of those who voted for the AK Party on June 7 have moved to this side, that is, between 18%. This is an important rate.

Do you say that 20% of those who voted for the AK Party on June 7 are now on the swing side?

Of course. This is a very important rate. Today, we find the AK Party’s raw vote 35%. 41% voted due to the emphasis on stability. Undoubtedly, 41% is again an important rate as the sum of the two parties following it. 6% of the votes are the ones given stability, appreciation of 13 years of action, and due to lack of alternatives. The fact that this 6% has become indecisive by throwing these reasons back is a big message to the AK Party. If the early election decision is made according to the impression that the AK Party and CHP have risen and the MHP has fallen, everything may turn upside down at the ballot box. 18% voters are a very important mass, this group is the third party. It doesn’t go anywhere as 18% blocks, but it can cause a 2-3% drop and rise for a party. Campaigns and teams will be very important in the next election. A selection where perceptions will be managed and campaigns will be effective is waiting for us.

“Nationalist votes do not come with terrorist operations “

Another highly debated issue is whether voters with high nationalist sensitivity will turn to AK Party due to their attitude towards the conflicts in the Southeast. Did you see any signs of this in your research?

We cannot say “AK Party won the admiration of Turkish nationalists by starting an operation”. A transition from MHP to AK Party will not be possible with a harsher approach to terrorism. Because of the harder AK Party, MHP puts another one on top. It is a dominant understanding brought about by these years. By saying “There is no Kurdish problem”, we cannot say that an area where you will turn to nationalists will bring you votes. We also experienced this on June 7, it did not bring votes. When the operation starts, you cannot give a better positioning photo than MHP against terrorism, because that’s where MHP exists. How is the transition from MHP to AK Party? If you have integrity with nationalist discourses, if you coincide with the nationalist definition with your economy, foreign policy, your righteousness, your ideology, you will get nationalist votes, but you cannot get nationalist votes only through anti-terrorism operations.

Despite what you said, in your latest research, you found a 2% increase in the AK Party. Where did these votes come from?

There is a rate close to 5% in parties that do not pass the threshold. These votes came from the Felicity Party, the BBP and Hüda Par, who entered the elections with independent candidates.

“HDP compensates for the West’s loss from the Southeast”

Whether the HDP will pass the threshold in the June 7 elections was the most curious issue. If HDP passed the threshold and AK Party could not come to power alone. Now, news of conflict is coming from the Southeast. How does this conflictual process affect the HDP’s game?

The mission undertaken by HDP in the solution process before the June 7 elections was the position of being an actor together with AK Party. It created an awareness for HDP among the Kurds. HDP opened a space for Kurds in representation and sat at the center of it. HDP’s position to support civil politics has also broken the perception of “PKK equals HDP” in the West.

Are you saying that those who look at the HDP in the West have stopped seeing the PKK anymore?

Yes, I’m trying to say that.

Is this situation still going on?

HDP has been more influential in the West with its discourse on the opposition to Recep Tayyip Erdogan. As of today, with the onset of PKK actions, the rhetoric of “PKK equals HDP” has begun to partially respond in the West.

Do you want to say “There is a loss in HDP”?

In the June 7 elections, HDP has already passed the threshold with the votes it received from the Kurds. We see that the Kurds, who are currently voting for AK Party in the Southeast, are turning to HDP. While the operations were being watched on TVs in the West, these operations caused a reaction among the people who experienced the operations themselves. We see an interlocking in HDP. In our research, we see that HDP put 3-4 points on it compared to the last election, especially in the 16 provinces in the Southeast where it is the first party.

The Kurds kept the thread of the peace process by acting cautiously with their past experiences. It brought its support to the solution process to 97%. However, we observe that by saying “There is no Kurdish problem” and ignoring the Dolmabahçe agreement, there is a lack of confidence that the state has let them down once again. When this sense of trust disappears, they turn to HDP as a center. It is possible to say that the operations did not benefit AK Party, but HDP. For AK Party, the votes in the West that will turn from HDP to CHP again do not matter. It is the AK Party’s preference for those votes to return to CHP again. Qandil’s approach hits HDP votes in the West; however, HDP collects the votes that go to AK Party in the Southeast. Therefore, HDP is neither falling nor rising. Meanwhile, HDP is increasingly becoming the center of the Kurds. Half of the Kurds were represented in AK Party and half in HDP. As of today, we can say that three-quarters of them are represented by HDP and one-fourth by AK Party. Kurdish voters asked AK Party, “We were good at voting for you, can’t we support a party that is related to ourselves? Was the sincerity towards us created with by voting?” Meanwhile, the HDP is also regressing towards becoming a party that has to return to the region instead of becoming Turkization.

“CHP neither choose a side, nor did it get eliminated”

If we talk a little bit about the CHP, you found a two-point increase in CHP in your last research. Is it possible that this will turn into an increasing trend until the election?

We can say that the most lucrative party of the conflicts in the Southeast is CHP. MHP’s position in these conflicts is clear. AK Party has a dilemma of Kurds and nationalism. HDP is an actor of events. The subject is between these three parties. CHP did not kick the rock and neither opposed the nationalists nor developed a discourse against the Kurds. It is currently on the rise as it is perceived as a center of sanity. Often, if you cannot be a party to politics, you can be eliminated, but there are some problems that if there is no solution, the sane will prevail. If you are not part of the fight, if you are in a compromised position, you will be the winner here. The transformation of the rise into a trend is related to how to manage the process and how to create perceptions. With the increase of terrorism, the passage of votes will not be dramatic, but if there is a blow to the economy; If faced with a situation that destabilizes Turkey and is reflected in the pocket of the nation; voters can bill the government or the opposition that cannot form a government. Then the party that convinced the voters by explaining their position on why the coalition could not be formed comes to the fore. The next election will be an election to be won by those who manage the perceptions after June 7.

The Results Of The First Coronavirus Survey In Turkey Were Published